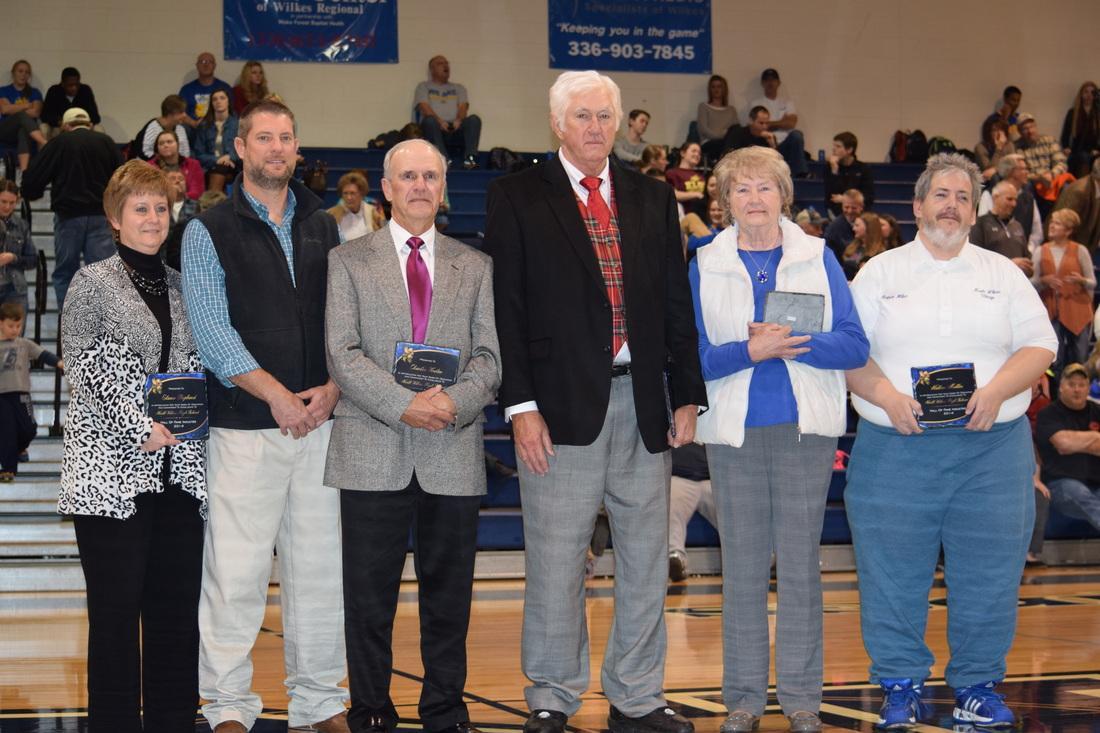 Dr. Jim Richardson
Dr. James “Jim” Richardson graduated from North Wilkes in 1960, where he excelled as a member of the school’s basketball team. Dr. Richardson earned All-Conference, All-Region, and All-State honors as a basketball player, while leading the Vikings to a second place finish in the state playoffs. Dr. Richardson went on to star at Appalachian State University, where he was a four-year starter and was named the squad’s Most Valuable Player as a sophomore and a senior. After graduating from ASU, Dr. Richardson went on to earn his doctorate in education from Duke University. Dr. Richardson served as a coach, teacher, and administrator at several colleges, including a stint from 1981 to 2005 as the president of Western Piedmont Community College in Morganton, North Carolina, and he was granted status as President Emeritus of that college in 2006. Dr. Richardson also received the Long Leaf Pine Award in 2006, which is the highest honor that can be bestowed upon a North Carolina citizen by the governor of the state, in addition to many other honors and accolades.Elaine ShepherdMrs. Elaine Shepherd was a long-time administrative assistant  at North Wilkes High School. As the school’s secretary, she was a member of the North Carolina Association of Education Office Professionals. Mrs. Shepherd was a member of the North Wilkes Booster Club from 1980-1990 and an active member of Hilltop Baptist Church, where she also served as the church’s secretary. Of Mrs. Shepherd one of her colleagues, Mrs. Pam Greene, said “Elaine was a great asset to North Wilkes High School. She helped any student who came into the office, whether it was because of sickness or a problem in the student’s day-to-day life. She enjoyed being able to help students and always treated them with kindness. Elaine loved her co-workers, and treated them like family. And she was very involved with her own family, and always spoke of them in a loving manner. She has been truly missed here at North.” Charles WootenMr. Charles Wooten was a woodworking and drafting teacher at North Wilkes for 18 years. During his tenure at North, Mr. Wooten served as the school’s football team’s offensive coordinator for 11 years, including during the team’s 1972 conference championship run. Mr. Wooten also served as head baseball coach; in 1974, Mr. Wooten led the Vikings to their only conference championship title to date. Mr. Wooten coached J.V. basketball for four years, and his team won the conference championship all four years; he also coached the freshmen team for one year. Mr. Wooten was named North Wilkes and Wilkes County Teacher of the Year in 1988. Mr. Wooten also served as the Transportation Department Director in Wilkes County from 1995-2001, and was the first Industry Education Coordinator in the county. In 1994, Mr. Wooten was named the President of the North Wilkesboro Kiwanis Club, and during his tenure the Key Clubs at North and East Wilkes were chartered. Mr. Wooten also served as a P.A. announcer for North Wilkes football, and worked as a color commentator and analyst for basketball and baseball games for WWWC Radio. Former Vikings’ athletic director Earl Eller said of Mr. Wooten, “Charles has always been extremely loyal to North Wilkes High School and Vikings’ athletics.” Dr. Frances TharpeDr. Frances R. Tharpe taught home economics at North Wilkes for 26-and-a-half years, and served in the Wilkes County School system for a total of 43 years. Dr. Tharpe, who graduated from Appalachian State University and earned her Ph.D from UNC-Greensboro, was inducted in the Omicron Nu National Honor Society and the Delta Chi Chapter of the Delta Kappa Gamma International Society for Key Women Educators. Dr. Tharpe served as an assistant principal and as a principal of Mountain View Elementary and East Wilkes High Schools. Dr. Tharpe was also elected for a four-year term on the Wilkes County School Board of Education. Dr. Tharpe has also stayed active as a volunteer in the Wilkes School System, helping in various reading and Book Fair programs, and has made frequent donations to North Wilkes High School and other schools in the county. Dr. Tharpe also helped raise funds for scholarships as a member of the local Viking Crew. Nathan MillerMr. Nathan Miller has been an integral part of North Wilkes athletics since his freshman year in high school, and has continued to help our various programs since he graduated from North Wilkes in 1991. While at North, Mr. Miller has helped manage several athletic programs, including basketball, football, softball, volleyball, wrestling, and soccer, and continues to serve in various capacities to this day. Mr. Miller also started the North Wilkes iHigh website, which is still a vital hub for information concerning Vikings’ athletics. Former North Wilkes Coach Randy Joines said, “Nathan is a true Viking and we are lucky to have him in the North Wilkes Hall of Fame, but more importantly, Nathan is a great human being.  If there was a Human Race Hall of Fame, Nathan would be a member because of his caring nature and his absolute willingness to serve.”Former Athletic Director Earl Eller said of Mr. Miller, “He has contributed a tremendous amount of time and effort for North Wilkes athletics, for both the boys’ and girls’ programs. We could never do enough to show our appreciation for all he’s done.”