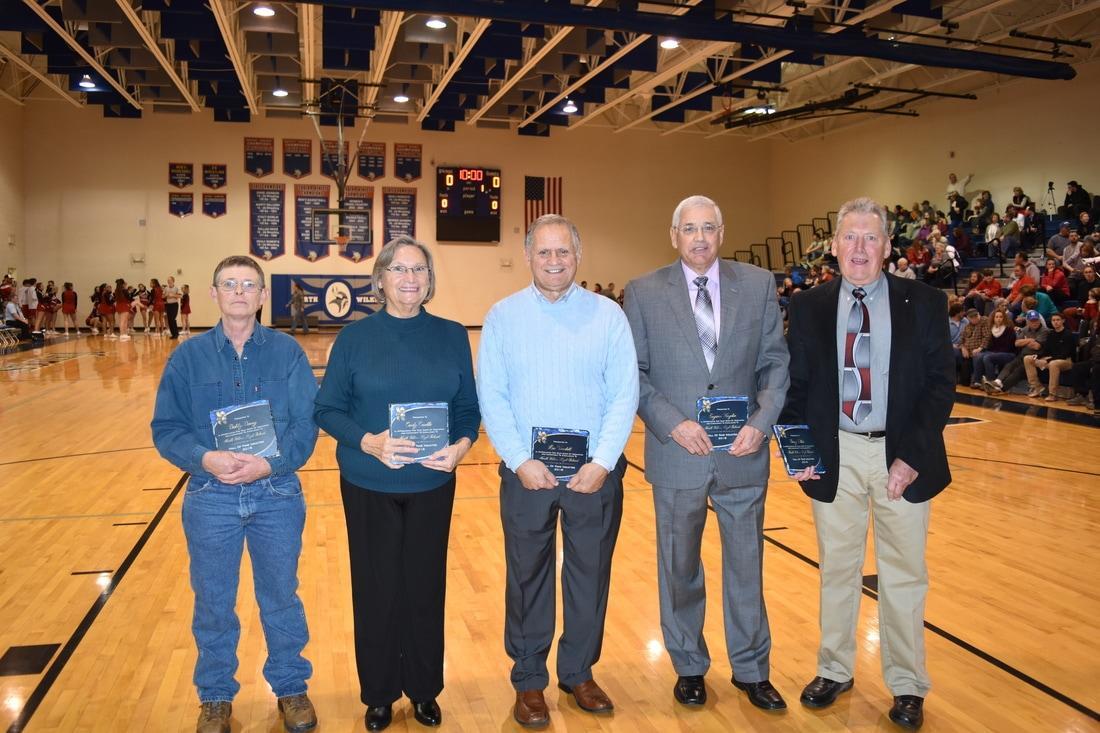 Debby Denny
Ms. Debra C. Denny worked for 28 years as a custodian at North Wilkes. Ms. Denny was responsible for the upkeep of not only the school building and surrounding grounds, but also of the various athletic fields and gymnasiums on campus. Mrs. Lisa Joines, the current principal at North Wilkes, said of Ms. Denny, “our school has been fortunate to have staff members who consider working at North to be more than just a job.  To them, North High is a part of their extended family, and they take pride in every aspect of our school life.  We are proud tonight to recognize one such staff member who had a long and dedicated career with us – Ms. Debbie Denny.  Debbie worked long and tirelessly as one of our custodial team here at North, and she is fondly remembered as a person who would always go out of her way to help any staff member in any way possible.” Mr. Jarvis Handy, a current custodian who worked with Ms. Denny during her time at North Wilkes, said, “Debby was someone I looked up to, a great mentor and co-worker. She took pride in the entire school, and the campus was always immaculate when she served as head custodian. Debby’s Viking Pride shown through as well, as she was always eager to lend a helping hands to staff and students.” .

Doug Eller
Mr. Doug Eller taught English at North Wilkes from 1980 to 2007, and for six of those years served as the English Department Chairperson. Mr. Eller also enjoyed a long and successful tenure as the school’s Head Varsity Basketball Coach. While a coach, Mr. Eller’s 1988 squad was the North Carolina High School Athletic Association’s state academic champions, and in 1983 his team was the District runner-up in basketball. In 2003, Mr. Eller was named North Wilkes Teacher of the Year. Mr. Eller was a member of the North Carolina High School Athletic Association from 1976 to 2007. Mr. Eller attends Mount Pleasant Baptist Church, where he has served as a Deacon and Sunday school teacher.

Heather Mullins
Dr. Heather Mullins is a former student and teacher at North Wilkes who currently serves as the Chief Academic Officer for Newton-Conover City Schools. Dr. Mullins was a three-sport athlete at North Wilkes, and was named Miss North High and Female Athlete of the Year in 1991. Dr. Mullins was named to the All-Conference basketball teams in 1990 and 1991, and All-Conference volleyball teams in 1989 through 1991. Dr. Mullins was a three-time conference champion in the shot put, and was the state runner-up in the shot in 1991. Dr. Mullins currently shares the school record for points in a basketball, with 42 points, with fellow Hall of Fame member Christy Gambill. Dr. Mullins was a Morehead Nominee and a member of Northlanders, in addition to being named to North Carolina Honors Chorus in 1991 and All-State Chorus in 1990 and 1991. As an English teacher at North, Dr. Mullins started the Indoor Track program and the Interact Club, and coached volleyball and indoor and outdoor track and field.

Eugene Wingler
Mr. Eugene Wingler spent 27 years at North Wilkes as an Industrial Arts instructor, as well as three years in the same capacity at the Wilkes Career Center. While at North Wilkes, Mr. Wingler taught architecture, drafting, furniture and cabinet making, and numerous woodworking courses. While at North Wilkes, Mr. Wingler worked on the athletic fields, remodeled dressing rooms and dugouts, built cabinets for school offices, and built cabinets, tables, and shelving units for the entire school to help usher in the computer and internet age. Mr. Wingler also volunteered with Wilkes Habitat for Humanity following the devastation of Hurricane Katrina. Mr. Wingler was a member of the North Carolina Association of Educators and the National Education Association​.