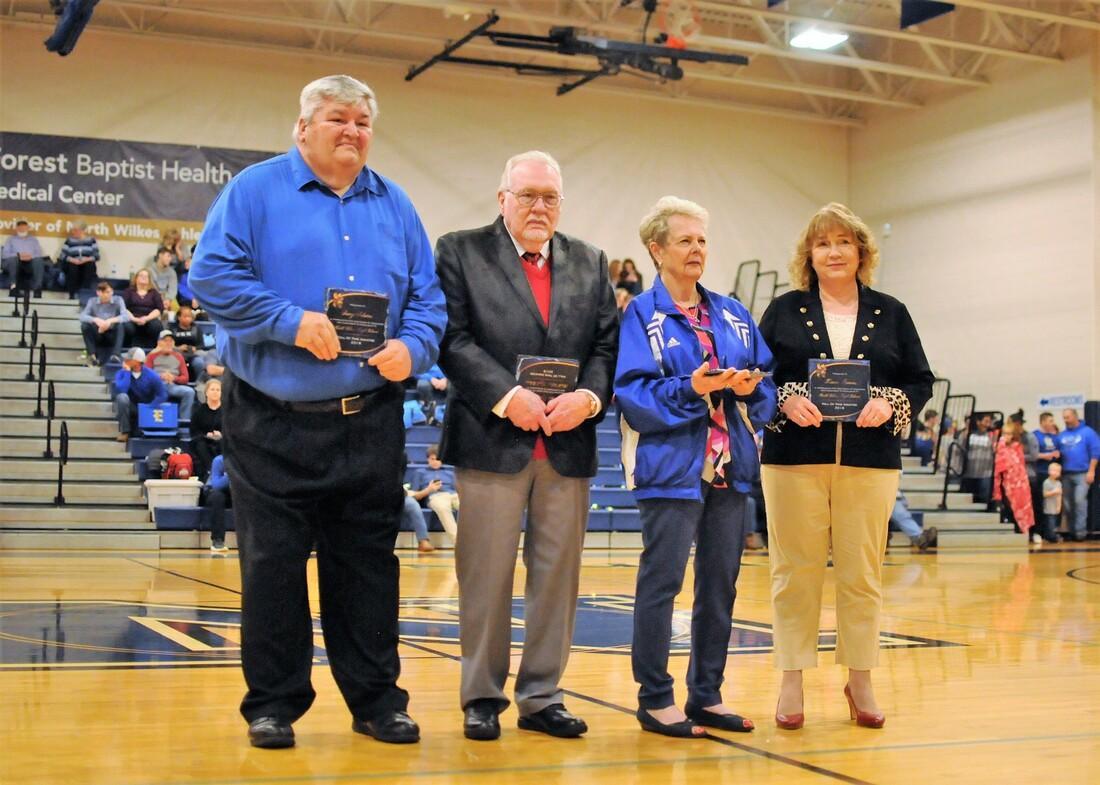 Mr. Terry AdamsMr. Terry Adams worked for years at football games and other activities at North Wilkes High School
during the fall as part of the concessions crew, starting at a time when the concession stand was little
more than a cinder block building. Mr. Adams was instrumental in developing the concession facilities at
North Wilkes, working countless hours to make major improvements. Mr. Adams, who won the
Principal’s Award in 2002-2003 for his efforts, was a member of the school’s Athletic Booster Club, and
in addition to fall events helped work concessions at events such as the Apple Festival, MerleFest, and
during the winter and spring sports seasons at North as well. Mr. Adams was also responsible for helping
to expand the menu choices at football games here at North, helping to introduce such staples as
homemade fries, nachos and cheese, and the ever-popular Thor Burger. The food at North Wilkes
football games was considered so good that once a set of officials who were hired to work a game at
another school came all the way to North Wilkes prior to kick-off to eat supper, since the food, including
the Thor Burger, was so much better. These contributions increased concession profits for North Wilkes,
which in turn significantly improved the financial support of the school’s various athletic teams.
​
Mr. Rex Barker
Mr. G. Rex Barker taught for nine years at North Wilkes High School as a Vocational Agriculture teacher,
and began that program in 1962. During his final year at North, Mr. Barker was also an administrative
intern and assistant principal, which helped Mr. Barker start a long and distinguished career as a
principal in Wilkes County Schools. Mr. Barker served as the principal of Traphill Elementary from 1971
to 1980, at Ronda-Clingman Elementary from 1980 to 1983, and at East Wilkes High School from 1983 to
1985. After serving as a principal, Mr. Barker continued to serve the students of Wilkes County as the
Director of Vocational Education from 1985 to 2000, and served in the same capacity for the Yadkin
County School System from 2000 to 2004. Mr. Barker was instrumental in preparing the grounds for
North’s inaugural football season, working on both the original football field and the original goal posts.
Mr. Barker served as a pallbearer for Wake Miles, a former North Wilkes student who was killed in the
Vietnam War and inducted last year into the Hall of Fame. Mr. Barker also served as a Wilkes County
Commissioner, a member of the Wilkes United Way Board of Directors, and as a Supervisor for the
Wilkes County Soil and Water Advisory Council. Mr. Barker is also a member of Benham Baptist Church,
where he has served as a Deacon, Trustee, Sunday School Teacher, and choir member.

Mrs. Annette Greene
​Mrs. Annette P. Greene was an assistant principal and principal at North Wilkes High School for a total of
eight-and-a-half years. Mrs. Greene was the school’s principal from 2004 to 2008. During Mrs. Greene’s
tenure at North Wilkes, she was a Principal of the Year nominee and won the Wilkes County Principal of
the Year Award, Mrs. Greene was a member of the National Teacher’s Association and the North
Carolina Principal’s Association. Mrs. Greene commented upon her induction, “The rewards of my
educational career are too numerous to list. I was a teacher, Central Office Program Director, assistant
principal, and a principal, and always a student advocate who wanted to make a difference. I owe any
success I had to students good and bad, good teachers and bad, good parents and bad, and being strong
enough to stand up for what is right.”

Mrs. Karen Reeves
​Mrs. Karen Wiles Reeves attended North Wilkes High School and graduated with the class of 1972. Mrs.
Reeves was a cheerleader for four years and served as a member of the Yearbook Staff, the Beta Club,
the FHA, the Senior Girls Club, the French Club, and several other organizations on campus. Mrs. Reeves
was also an Honor Graduate who won the CB Eller Scholarship, the VA Full Scholarship, and was selected
into the Who’s Who by the faculty at North and as the MVP of the cheerleading squad. She was also a JR
Miss Contestant. Mrs. Reeves graduated Summa Cum Laude from Gardner-Webb University, and
worked at Lowe’s Companies from 1974 to 2003, where she worked in Strategic Planning, Auditing,
Accounting, Merchandising, Corporate Communications, and other departments. Mrs. Reeves helped
found Merchandising Solutions Group in 2003, and continues to serve as Partner, Chairman of the Board
and Chief Operating Officer of that company. Mrs. Reeves also served three terms as a member of the
Wilkes County Board of Education; during that time, the board implemented a plan to build four new
middle schools, improve the four high schools and multiple elementary schools, acquired the new
location for the Central Office, and laid the foundation for Wilkes Early College High School. Mrs. Reeves
is also one of the founding members and president of the Viking Crew. Mrs. Reeves is also an active
member of Mountain View Baptist Church, where she is a Sunday School teacher, choir member, and
teacher for the Vacation Bible School.